It is understood that the new cute series of Vcare Diapers was launched in October this year. As a new series of Diapers launched at the end of the year, it successfully opened the market in the maternal and infant industry with its high-end quality and cute appearance. As consumers, it is sometimes difficult to distinguish the brand if you only look at the appearance of the product when buying diapers. It is undeniable that most domestic and foreign diaper brands also devote their energy to the research and development of product materials, thus ignoring the appearance.

Vcare is a company with a 12-year brand history, and its team is quite comprehensive in research and development. For example, the silk soft silk thin diaper introduced in the early days is not only soft but also light and thin; later, in order to help the baby stay away from red PP, the fruit C series diaper was developed and produced. Today, the brand R&D team has once again made breakthroughs in innovation, ensuring high-quality, high-quality diapers, and ingenuity in appearance, making the Mengqu series stand out among many brands. 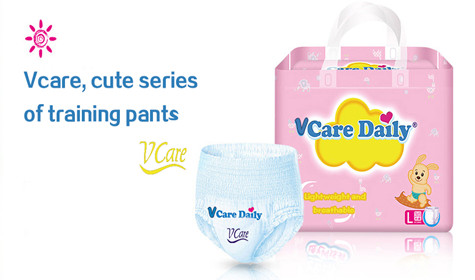 Ms Zhang from Beijing said that she took her 6-month-old baby to take a bath last month, but because she forgot to bring diapers, she bought a pack of Vcare wet cute series on the recommendation of the store staff. "I liked it at first sight. As a 29-year-old mother, there is actually a little princess living inside." Ms Zhang revealed that this cute series is not only cute, but the key is that the baby is comfortable and soft. , Thin and light, sucking urine is also very fast.

Vcare has been based in the market for 12 years. It is a company that has a good reputation as an old brand in China. However, it has launched 4 series before and after. Each series has won high praise from mothers in the market. . The Mengqu series relies on the high-end quality of the soft, breathable, light core, and the cute appearance to make it full of personality, making it a good diaper with a better reputation!